The Canadian Union of Public Employees is Canada’s largest union, with 700,000 members across the country. CUPE represents workers in health care, emergency services, education, early learning and child care, municipalities, social services, libraries, utilities, transportation, airlines and more. We have more than 70 offices across the country, in every province.

For the 3rd time in 4 years, OMERS is trying to take away guaranteed indexing, an important benefit that protects our pensions from inflation when we retire.

Get The Facts – Defend your OMERS Pension With NEW TOOLS

OMERS belongs to plan members – and we deserve to know details of what is being debated and being voted on by the OMERS Sponsors Corporation Board of Directors on June 24th.

Click here for a NEW Myth Buster Document where we unpack some of the “spin” that is being used by some to disguise the very worst parts of this proposal to remove guaranteed indexing.

Click here for a NEW CUPE Ontario Webinar recording on the proposed changes at OMERS. It’s full of important information about what’s at stake – with questions from plan members – and what YOU can do to try to stop it!

Click here for a NEW letter from CUPE New Brunswick that describes the devastating impact of the original “Shared Risk” pensions which came out of their province.

TAKE ACTION AND SHARE the FACTS – it’s important to get these NEW TOOLS out to as many OMERS members as possible and to make sure OMERS hears the voices of members.

They’re at it again.

For the 3rd time in 4 years, OMERS is pushing a proposal to eliminate guaranteed indexing which, if passed, could allow inflation to erode the value of our pension.

The OMERS Sponsors Corporation (SC) Board of Directors is barging ahead during a pandemic with a vote to eliminate guaranteed indexing on June 24th, a plan that has already been rejected twice. This, despite tens of thousands of us already demanding that they postpone the vote until after the COVID-19 crisis.

Will you add your name to defend guaranteed indexing and a dignified retirement for all?

If Worker Representatives stand united, we will defeat this harmful proposal and defend our guaranteed indexing. We know we can count on the CUPE Ontario, CUPE Local 79 and OPSEU Representatives to vote NO – but that won’t be enough.

It’s important that the Board Members hear from the workers that they represent. We need to speak out and tell them to stand united and vote NO to eliminating our guaranteed indexing.

If it passes, this proposal will eliminate an important and valuable pension benefit for OMERS members. It will mean OMERS members, particularly younger workers, will have less valuable, and less secure pensions in retirement.

To understand just how bad “Shared Risk Indexing” really is, CUPE Ontario has developed a Frequently Asked Questions which can be found by clicking here.

Tell the OMERS Board: VOTE NO to eliminating guaranteed indexing

Join the CUPE contingent at the 2020 International Women’s Day rally and march. 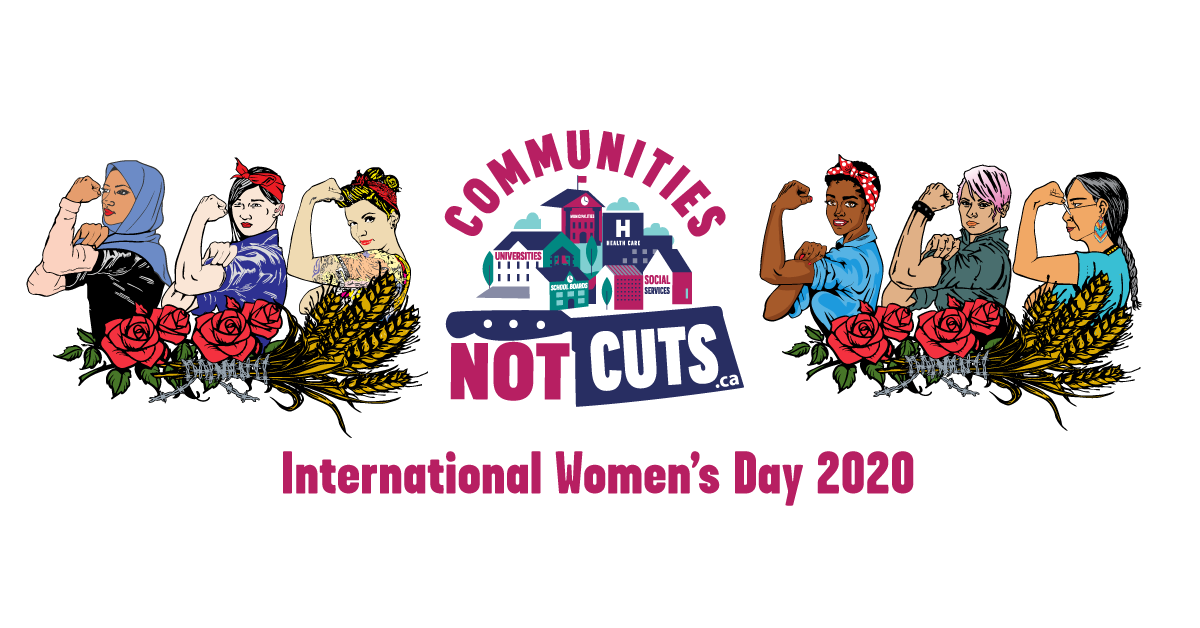 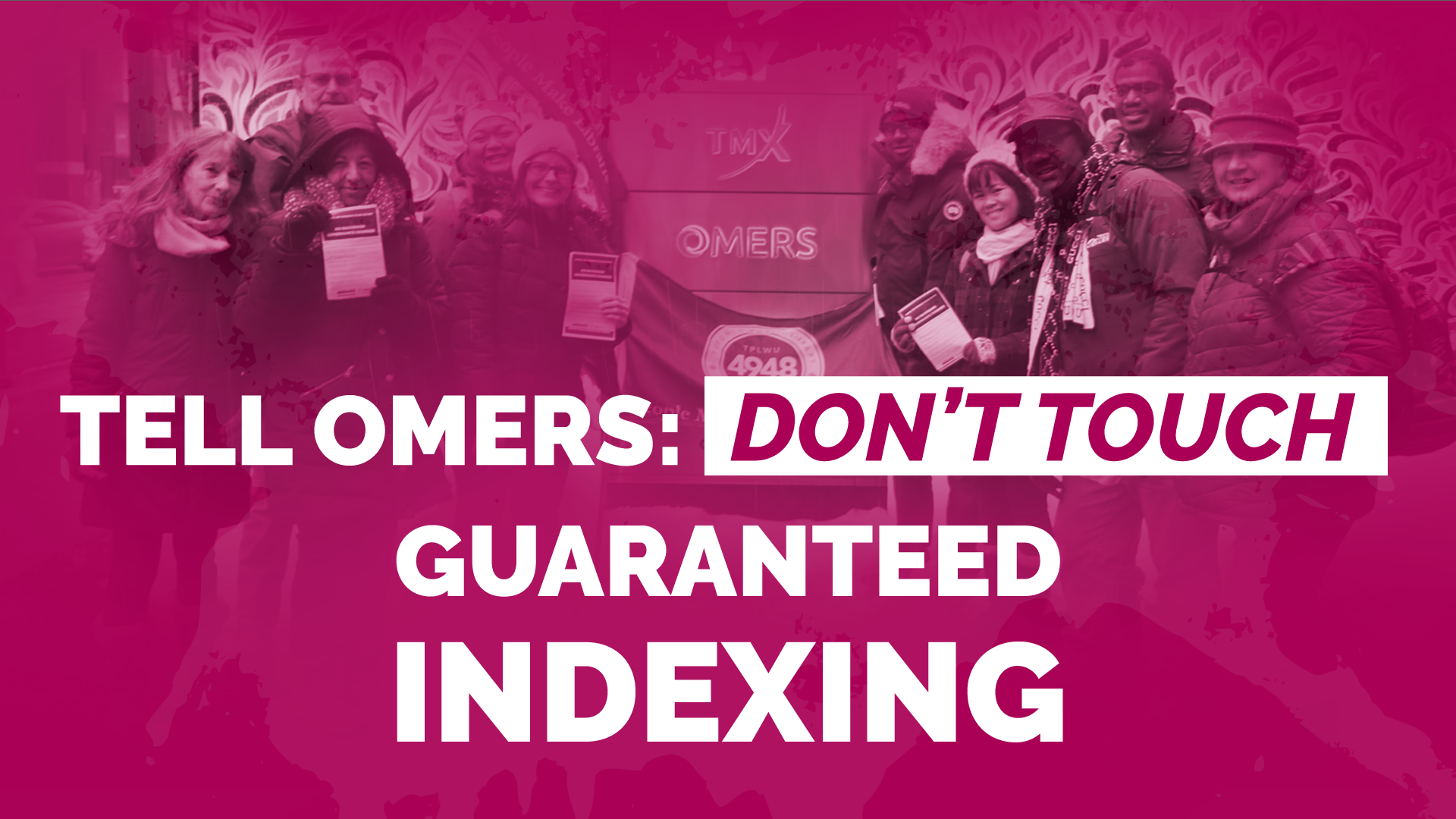 Over the last two years, some members of the OMERS Sponsors Corporation (SC) Board have attempted to remove the guaranteed indexing of your pension. So far, CUPE Ontario, allies, and plan members have been able to defeat these attempts.

Unfortunately, there is a good chance that this year another attempt to remove your pension’s guaranteed indexing will be made.

Let’s be clear. The OMERS plan is doing well and when you retire you deserve to have a pension that keeps up with inflation.

Please take a moment and send this email to OMERS CEO Michael Rolland and other members of the SC board.

As you are probably aware, late last year the OMERS Sponsors Corporation (SC) Board passed a series of dramatic by-law changes. CUPE Ontario launched a campaign to protect members’ rights and OMERS plan members were able to successfully push back several of the changes. Unfortunately, many others were adopted.

As a result of OMERS’ refusal to formally provide CUPE Ontario and plan members with the actual text of the by-law changes, the only way to do a full analysis of what the OMERS SC Board voted to change was through a side by side reading of the ‘old’ and ‘new’ by-laws. CUPE has now completed that process which is summarized below

Click here for an update on changes to OMERS by-laws.

Throughout this incredibly frustrating process, CUPE Ontario worked with our allies, our SC Board Representatives and thousands of OMERS plan members to fight for our rights at our pension plan. While there were some important victories, we are deeply disturbed by the changes that were made to OMERS’ governing documents without proper notice, disclosure, or consultation.

As the union representing almost half the active plan members in OMERS, CUPE Ontario knows it is our duty to act as the guardian of not only plan members’ assets and retirement benefits, but their central role in the governance of this plan. We will continue to take whatever steps are necessary to protect CUPE members’ rights and retirement income security in OMERS.

All scheduled meetings are cancelled until further notice.